Nice vs. Right - How Do You Decide: A guest post by Mark Miller

Here are a few considerations when you’re trying to separate the right things from the nice ones.
What are you paid to do? When facing a nice vs. right decision, one obvious filter is how the various options align with what you’re actually paid to do. Does one of the options better align with your job description?

What are your goals? It might go without saying, but we all know some activities are better suited to move us towards our goals than others. When you’re debating a nice vs. right decision, check your goals. Which option is on strategy? Which activity best helps you accomplish your goals?

What are the long-term implications? When considering right vs. nice, the right thing will almost always have greater long-term impact. That’s why it’s the right thing to do! For example, choosing to sleep in vs. getting up to run in the morning may feel great in the short-term, but it’s clear the advantage will be short- lived.

What were you made to do? I was talking with my son about the nice vs. right conundrum. He leads a non-profit organization dedicated to serving men and women living with HIV/AIDS. His response: “It depends on your calling.” He decided not to do programming for children, so his team could focus their energy and resources towards the adult clients – that’s his calling. Do you have a sense of what you were made to do? If so, keeping this top of mind may be able to help you discern right vs. nice.

What does your gut tell you to do? At the end of the day, most of the time you’ll know the difference between the right thing and the nice thing to do. Just stop and ask yourself: What’s the right thing to do? You’ll be surprised how often you’ll intuitively know the right answer.
As I mentioned earlier, my challenge is often finding the courage to do what I know I should do. I hope you’ll not struggle with that as much as I do.

Here’s the bottom line…
To maximize our impact we’ve got to trade the nice things for the right things.
Good luck!

Mark Miller, Vice President of Organizational Effectiveness for Chick-fil-A, believes that leadership is not something that’s exclusive; within the grasp of an elite few, but beyond the reach of everyone else.  In the tenth anniversary edition of The Secret, Miller reminds readers of a seemingly contradictory concept: to lead is to serve. With more than 600,000 books in print, Mark has been surprised by the response and delighted to serve leaders through his writing.


The 10th anniversary edition of The Secret will be released September 2, 2014.
Posted by Unknown at 7:30 AM No comments:

Introducing TyndaleDirect.com where you'll find special offers, gift suggestions and a selection of our favorite devotional titles—direct from the publisher at great prices. Plus, keep an eye on the Deal of the Day page—just in time for holiday gifting!


Reason for Reading:  I've read other of Dr. Cloud's books, including Boundaries.

Summary:  Boundaries for Leaders is Cloud's examination of how purpose and intentionality helps build the healthy relationships that great business success requires.  It is full of great examples, and Dr. Cloud's thorough analysis.

Disclosure of Material Connection: I received this book free from the publisher. I was not required to write a positive review. The opinions I have expressed are my own. I am disclosing this in accordance with the Federal Trade Commission’s 16 CFR, Part 255 <http://www.access.gpo.gov/nara/cfr/waisidx_03/16cfr255_03.html> : “Guides Concerning the Use of Endorsements and Testimonials in Advertising.”
Posted by Unknown at 9:26 AM No comments: 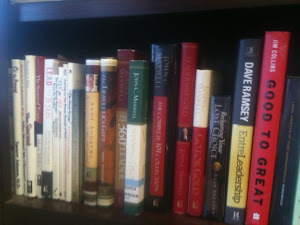